¿What is the situation in the Amazon with the illegal mining activities?

There are two trends that explain this situation.

First, the territories that were previously excluded from the mining industry due to public order issues, and as the previously mentioned problems were solved, nowadays, are threatened with extractive activities. This is reflected in the Colombian Government efforts to promote legal mining in these territories where highly appreciated minerals can be found such as gold, coltan, iron amongst others. There is a particular case in Guainia department, where its governor and a Canadian mining firm signed a memorandum of understanding (MOU) in order to explore coltan and gold.

The second trend shows an increase of illegal mining activities overall at the north-eastern Colombian Amazon, where the borders with Venezuela and Brazil are located. So, due to the Colombian State response towards these problems in the Amazon foothill, these illegal economies of gold mining are moving towards the Amazon plain, near to the country borders.

Regarding illegal mining, most of the illegal activities are related to gold exploitation in Caquetá, Amazon, Vaupes and Guainia rivers. Also, coltan is being exploited solely in Guainia.

How is the situation in Caquetá?

Illegal mining activities are done with a lack of technical and sustainable approach. Also, are executed through small boats and dredgers that causes ecological damages in the rivers, mostly because of the use of mercury that pollutes the water, affecting directly the local and border indigenous communities from Colombia and Brazil.

In relation to human rights, these activities affect directly the population’s health, as it was previously mentioned. Moreover, these disgraceful events violate the local inhabitants and the indigenous and voluntary isolated communities’ basic rights, who are under special constitutional protection. Furthermore, Nations’ cultural and natural heritage is being harmed, because these illegal activities are performed in Protected Areas such as National Natural Parks, Forest Reserves and Indigenous Territories. Also, places declared as Intangible Heritage of Humanity, such as Pirá Paraná Indigenous Territory, is being affected by mining having an impact in the cultural heritage, the governance of these communities as well as the economy of the nation due to the budget that is used to fix the impacts of this activities.

Who is behind this activity?

Historically, in areas such as the Caquetá basin, illegal mining activity was encouraged by Brazilians. At the time it was an activity that the FARC guerrillas get profits from, by charging ¨taxes¨to the miners. Nowadays with FARC dissidence, there is a direct link between illegal forces related to the activity that can be categorized as cartels. 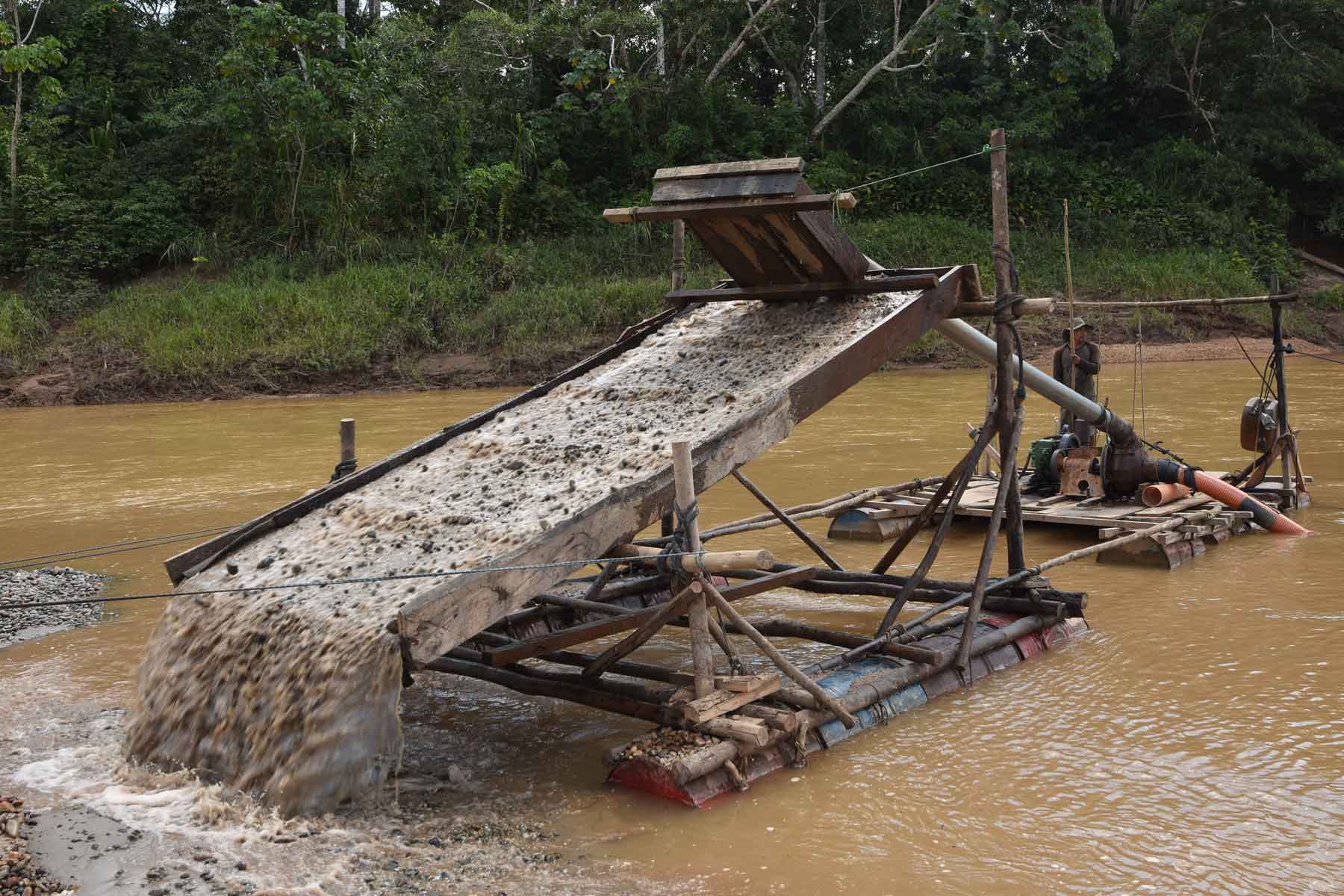 Is there any evidence or study that showed the consequences of mercury in local populations’ health?

Since 2014, National Natural Parks and the University of Cartagena led a series of studies in Indigenous Territories and Natural National Parks such as Cahuinarí, Yaijojé Apaporis, and Amacayacu Park, on the Putumayo River basin. The outcomes showed high levels of mercury in the population’s hair.  These alarming results raised many doubts about the technical expertise of the studies. However, this can be explained as the 80% of the indigenous diet is fish based, therefore it is a valid argument for the levels registered on the statistic samples.

In 2016 – 2017 a second study was led by National Health Institution alongside Cordoba University in Apaporis basin. The results of the investigation showed that 80% of the population of Yagojé Apoporis communities were poisoned with mercury.

Which Indigenous Territories are being more affected by illegal mining in Caqueta River?

The studies that were made in Cahuinari Natural National Park, showed mercury in Bora and Miraña communities associated as the Indigenous Traditional Authorities of Pani. Also, other studies done at the Natural National Park Yaigojé Apaporis (ACIYA and ACIYAVA) revealed high levels of contamination in Ticunas and Cocamas indigenous communities, while others in Aracuara showed the affectation in Huitoto communities.

Has illegal mining an impact in cultural indigenous communities’ culture?

We need to highlight the fact that indigenous peoples from the Amazon, have no mining traditions. In fact, for them, gold has spiritual value, and its extraction will deeply damage the people in the cultural level and will cause eventually a social breakdown. Stating this, any type of mining activity in the Amazon should not be allowed from the environmental and cultural perspective.

What are the actions from Gaia Amazonas to accompany indigenous peoples on this issue?

The actions from the State to deal with this type of problem are focused on criminalization, that is, police action. On the other hand, there is a formalization speech, that, instead of attacking the illegal activity, aims to legalize it.

It is important to highlight that there will be actions of responsibility from the State to control and monitoring these activities in coordination with the Indigenous Organizations as public and environmental authorities. Also, a territorial, environmental, political and cultural ordering work is necessary, and there have been advances in the recognition of Indigenous Organizations as territorial entities. Finally, there must be actions to generate economic alternatives according to the environmental and cultural particularities of these territories, in order to discourage the involvement of the local population in these mining activities.

Finally, there must be strategies of visibility and awareness of the importance of the Amazon and the impacts that the illegal mining generates on it. On the other hand, we need to create networks between border’s countries since there are corridors of illegality.

Is mining legal on Indigenous Territories?

The Mining code excludes National Park System Areas, moors and Ramsar sites from mining activities. However, there is a structural problem concerning to mining in Indigenous Territories: mainly because mining titles and licenses are granted prior to the consultation process. Nonetheless, some of the territories overlap with other figures as systems of National Natural Parks where the activity is forbidden.

One of the requirements for Colombia to join The Organization for Economic Co-Operation and Development (OECD) was that the procedures concerning licenses and titles should be unified, given that the current procedures generate social and environmental conflicts, and violates the fundamental rights of indigenous peoples.

Colombia’s State has signed different international agreements for the protection of the Amazon biodiversity. In this sense, it is important to highlight the Supreme Justice Court judgment that recognizes the Amazon as Subject of Rights, therefore it conditions the development model for this territory.

Abundance in the Amazon: qu...

Unlike in the West, abundance is not given by the quantity of food, but by its quality, because the nourishing food is that which originates in the territory.

Health: A reflection of the...

Indigenous peoples are recognized as part of a system of visible and invisible beings that make up the whole territory. The human being is not separated from the jungle, affecting the territory is affecting the well-being of those who inhabit it.

How to protect the Indigeno...

Indigenous organizations of the Amazon are calling on the national government to prevent the entry of COVID-19 into their autonomous territories.